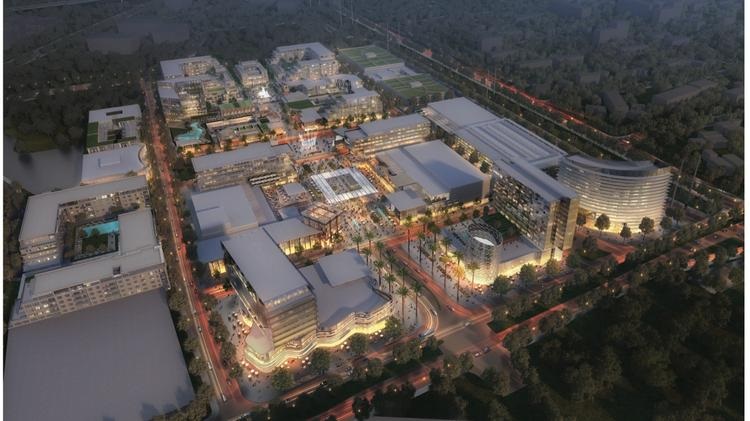 An earlier version of this story said that Mr. Jain is a San Jose planning commissioner. He is a Santa Clara planning commissioner.
Santa Clara’s city council late Tuesday unanimously approved the largest private development project in Silicon Valley’s history, despite deep concerns from San Jose over a growing jobs-housing imbalance and continued questions from regulators about building on top of a former landfill.

The green light gives the Related Companies the OK to build a $6.5 billion mixed-use center and office campuses just north of Levi’s Stadium, on land now occupied by a city golf course and dirt-bike track. The milestone comes three years after the city first floated the plan for the 240-acre city-owned site. And it could provide hundreds of millions for the city over the next few decades — assuming it all gets built.

This night shot shows the mixed-use component of the project. The street in the… more
“This project, looking at the real estate side of it, and the fact that we we own it, it’s whipped cream with a cherry on top,” said Mayor Lisa Gillmor prior to the vote. “Not only will we get the development that services our community, but also we’ll reap the financial benefits of having a cash flow into our general fund for generations to come.”

“Our entire team here and in New York is completely geared up and ready to move this project forward just as soon as we can,” said Related executive Steve Eimer at the meeting.