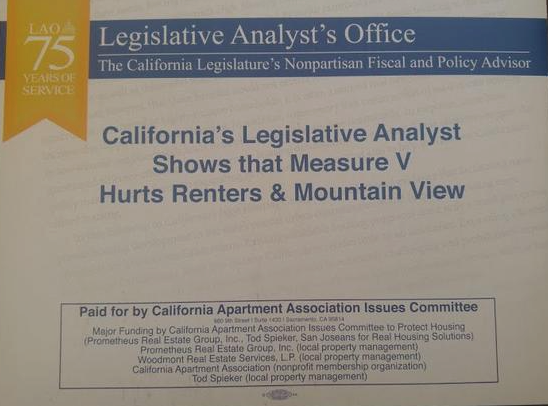 On Oct. 26, the state's Fair Political Practices Commission rejected at least one of them.

CALIFORNIA APARTMENT ASSOCIATION ISSUES COMMITTEE
The complaints centered around mailers sent by the California Apartment Association Issues Committee that featured the banner of the Legislative Analyst's Office. The mailers were sent to sent to residents of cities with rent control initiatives on their November ballots, including Mountain View, San Mateo and Burlingame.

An FPPC letter dated Oct. 27 rejected at least one of the complaints. The letter was addressed to a member of the Mountain View Tenants Coalition, among others, and states the FPPC found no campaign violations related to the mailers and will not pursue the complaint any further.

The letter goes on to explain that the Political Reform Act, which the FPCC enforce, does not cover the content of mailers. The Act does cover disclosure requirements, and the letter states the mailer in question "appears to be properly identified as coming from the California Apartment Association Issues Committee."